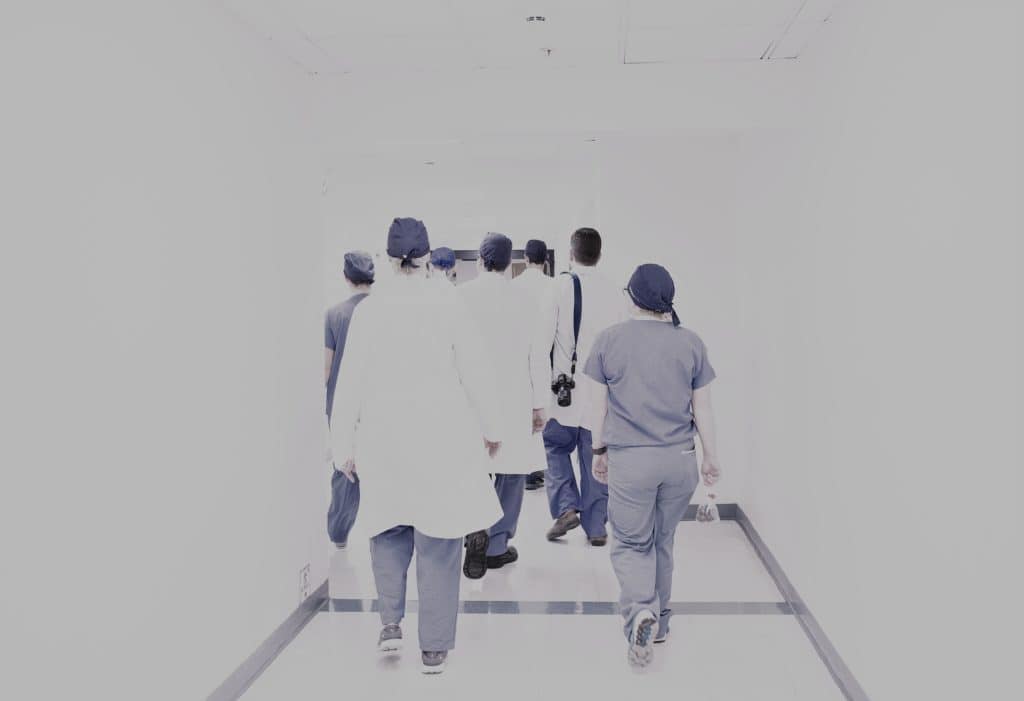 Sarah, who blogs at Infertility Honesty, agreed to share her story.

The chaos began early and never let up.

After shedding birth control, and during our first cycle trying to conceive, I didn’t feel quite right. Taking my body’s cue something was wrong, I visited my first reproductive doctor. He told me my ovaries were aging quickly, based upon slightly elevated FSH levels.

An aggressive sales pitch followed. “One or maybe two IUIs would be ok, but really you should go to IVF as quickly as possible.”  His urgent sales pitch made me very uncomfortable. An indifferent crash course on injections followed.

A month later I went to a second fertility clinic. This doctor’s bedside manner was commendable. He showed me the sonogram monitor. It revealed my alive and kicking ovaries and no evidence of the prior doctor’s claims.

I did three rounds of IUI with injectables at this clinic.  In the process, I got an eye-opening education on fertility medicine’s incompetence.  I didn’t feel right ahead of my second cycle (due to hormone-producing ovarian cysts from my first cycle). I advocated we not go ahead with the next cycle just yet. My doctor, however, was not available for consult. I endured unnecessarily rough vaginal sonograms, one so bad I refused treatment from the technician when she reappeared.  The request I made not to be treated by her went ignored. I spent $500 on meds before my second cycle was cancelled.

Later I was treated as an inconvenience while suffering a mild to moderate case of ovarian hyper stimulation syndrome.  Even in its mild form, OHSS is a miserable and serious condition.  BTW: I had been assured prior women of advanced maternal age (I was 39 at the time) never get it.

I was exhausted.  And done with this clinic.

I wondered why no one was trying to investigate.

I did IUI #4 and #5, both with injectables, at the next clinic.  This one was better organized, more professional and had more reasonable practices.  I met with the doctor but was never examined physically.  As I continued to stim like a champ, there was no inquiry into why I wasn’t getting pregnant.  IVF is the answer for everything in that world.

In Search of a Diagnosis

I became increasingly aware the mantra, “You’ll have to move on to IVF,” is not a diagnosis.

Unlike other branches of medicine, in fertility medicine it’s the patient’s job to figure out the kind of doctor you need.  Or, you get ‘lucky’ and stumble upon one.

In the interim, I interviewed two IVF doctors. They missed what turned out to be stage three endometriosis.  One pointed to the sonogram screen noting my bladder wasn’t emptying entirely (a symptom of endometriosis exacerbated by IUI). They dismissed it and urged IVF ASAP.

My stipulation for ‘doing IVF’ was an actual diagnosis.

The next clinic I interviewed for IVF was run by doctors who specialized in endometriosis.  I unknowingly had it.

I knew little about endometriosis.  It’s a disease that impacts 10% of the female population. I don’t recall being taught about it in health or sex ed.

The examining doctor seemed certain I had endometriosis. A month later stage three endometriosis was removed from my pelvic region.  Ominous reality set in.  Endometriosis in an estrogen- dependent disease. The drugs during my IUIs rendered much higher-than-normal estrogen levels.  Not only did the IUIs not get me pregnant, they made me worse.  Just as I had suspected.

I finally had an explanation behind my slightly elevated FSH levels. Endometriosis impedes egg quality if not operated on.  It’s also a disease that negatively impacts fertility in multiple ways. Endometriosis is an issue of the immune system’s impact on the reproductive system, I learned.

The pitch for endo surgery included swift minimization: “One of my patients went back to work after one day off,” the doctor boasted.  It took me a week to get back up and around.  At the post-surgical consult, the doctor suggested IVF as soon as possible, the next cycle would be best.  I informed him I needed to recover from surgery first.

We sought out a reproductive immunologist. I initially felt we were in good hands, but debilitating drug side effects from lupron and hgh were glossed over. Unprepared I suffered due to their effects.

The doctor seemed stoked about in-vitro maturation (eggs not mature upon retrieval can be retrieved and matured in the lab).

After our second IVF we learned my husband and I had an unfortunate genetic combination that did not allow my body to create an immune tolerance to our embryos. My body rejected our embryos.

Heartbroken, I felt this rendered our past efforts pointless. I questioned the timing of this news. My doctor said it was new science he was just starting to utilize.  I’ll never know if that was true or if it was the clever use of ‘science’ to get us to sign on for two more IVFs (which we did).

During my third round of IVF I was 41 years old. Three years of trying and my doctor was elated with my ovarian response.  At one point he told me I was “like a fine wine, I got better with age.”  Hmmm, reproductive proof anyone?

The medical professionals in the fertility business only make themselves present for the good stuff.

When there’s emotional fallout after a good stim that yet again produced no baby, not even a double line?  Crickets.

Minutes after the embryo transfer in our fourth IVF, someone from the front desk approached me about money we supposedly owed. I was still on the procedure table. It’s hard to imagine this would occur in any other branch of medicine.

Throughout my IVF’s the clinic waiting room was a source of PTSD triggers.

Not once had I been informed about the mental health risks involved in multiple failed fertility treatments.

I detailed one waiting room experience to my doctor. He didn’t dismiss me outright, but nothing changed. People brought their babies conceived via ART for show and tell, often egged on by nursing staff.  They failed to understand parenthood could be a painful theatrical event.

Baby picture collages appeared beneath the office window during the holidays.  I had my share of panic attacks in the waiting room prior to treatment. I once had to await my appointment in my car, shivering in the winter cold.  I’ve heard of women going to the clinic bathroom to sob or vomit over waiting room triggers.

At the beginning of IVF, the nursing staff were attentive.  They checked in on my reaction to the anesthesia used during retrievals. They used ‘when you get pregnant’ language and supplemented my drugs with freebies as I was paying out of pocket.  ‘You’ll need the money for diapers soon’ they cavalierly assured.

After our third failed IVF?  The drug handouts stopped just when we were totally out of money.  They handled me with a frigid indifference. No emotional acknowledgement, which is what an embattled veteran needs.  In trying to get a hold of my doctor I was once told he was on a flight to Boston to present a paper, as though I should be thrilled at such a notion.

What I actually ensured was the clinic’s complete and utter disinterest.

By our fifth IVF, prompted by the presence of six frozen embryos created from those infamous eggs not mature upon retrieval, our doctor and staff had very little presence.  During a Christmas cycle postponement, the nurses said, “at least you can go home and enjoy the holidays now.”

Yeah, you know, what with the existence of my CHILDREN hanging in the balance.  Sure.

During our last cycle I asserted my own protocol.  “What about the intralipid drip?” I asked of the formerly adulated treatment for my elevated natural killer cell activity.  “I guess I can order you one,” the nurse said halfheartedly.  How quickly the manic excitement over eggs not mature upon retrieval evaporated.  (It should never really exist. Pregnancy rates for embryos from eggs not mature upon retrieval are abysmal.)

Upon confirming the failure of our fifth IVF by phone, another offer of egg donor. That was it.  No clinic follow up, no check in. No patient tracking. No palliative care.

I was left with no acknowledgement of the compounding mental health ramifications. No impartial (read: not trying to sell something) counseling on potential paths forward. No network of people who knew the path I was about to travel. No support system of people who stopped treatments without a child.

Worse, I now had to face a world rife with angst over diapers prices, convinced an empty nest and teaching kids how to drive are the worst traumas humans will ever face.

I didn’t want to die, but I had no desire left to live either.

All told I gave three years of my life and $80,000 to the field of assisted reproductive technology, along with brilliantly responding ovaries, 32 eggs and 24 embryos, 17 of them grade A quality.  I was a great patient. I listened to my body and acted upon its signals. I followed protocol to a T.  Proactive, I took care of myself well.  Through all I never once got pregnant.

Fast forward two years. A new gynecologist gave me a thorough pelvic exam.  “Your utero sacral ligaments are fine,” she informed me, referring to where I had a lot of endo removed.  It hit me then and there my endometriosis had been detectable by a basic pelvic exam. Multiple doctors had either missed or ignored it.  My first two precious years of trying to conceive – wasted.

The narrative in this industry, and in the outside world for that matter, is achingly one sided.  Clinics promote their successes to fill you with hope often unfulfilled.  My doctor’s website claimed almost everyone treated in his practice got pregnant.  There is no mention of the reality of people who don’t get pregnant.  Not ever.

The fertility industry exudes hope, a marketing hook, while remaining impervious to its fallout.

How I wish it addressed all sides of the experience and championed truth supported by scientific evidence.

I am left with questions for which there will never be answers.  If IVF hadn’t been painted as the savior of all things baby making, if the failure rates were clearly disclosed, would I have made different decisions?  Why didn’t a gynecologist tip me off to my endometriosis?  Had I been diagnosed in a timely manner, would I have a child, or children, now?  Had I been diagnosed in a timely manner, could I have gotten pregnant with much less invasive, less costly treatment?

Learn more about patient stories, or email us with your #UnmaskingIVF story at info (@) reprotechtruths [dot] org