IVF Left Us Traumatised and Heartbroken

IVF Left Us Traumatised and Heartbroken 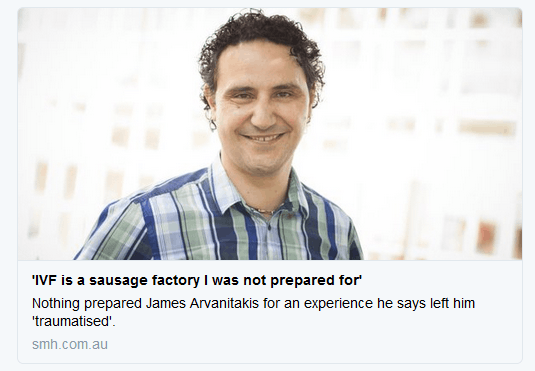 Former IVF patient Professor James Arvanitakis is a Lecturer in Humanities; Dean, Graduate Studies at West Sydney University; a writer and a contributor to ABCNews24 Breakfast. In 2012 he was named Prime Minister’s University Lecturer of the Year. He wrote the following piece for the The Sydney Morning Herald and agreed to let us share it here as part of our #UnmaskingIVF campaign.

In 1977, barely nine years old, I woke on an early summer morning with a swollen chest. Concerned, my mother insisted that we go to the hospital.

A long wait in casualty was followed by a week-long stay in hospital and many intrusive tests which resulted in a diagnosis of with non-hodgkin’s lymphoma – a type of cancer that attacks the red blood cells and immune system.

After some three years of experimental treatment, I was lucky enough to be cleared of the cancer.

In many ways, the trauma of the operations, chemo and radio therapy has never left me. Some 40 years later, I still find walking into a hospital difficult, the smell of raw alcohol makes me nauseous and I need days to prepare myself for any sort of injection – from a flu shot to a blood test.

But the real sting in the tail of the cancer was that I was left infertile as the massive amounts of chemo and radio therapy literally zapped my reproductive organs.

I was not informed of this until I was 19. As a young, first generation Greek Australian, this caused a crisis of identity. So much of who I was focused on my desire to have a family, have children and, as my mother always reminded me, produce happy grandchildren.

Like most challenges we face, I learnt to adapt. Though infertility was a major contributor to the loss of three wonderful relationships over the years, it was something that I accepted and simply responded to queries about children as, “love them, but not for me”.

This all changed in 2015 when my now wife and I decided to pursue an IVF program. The decision was a joint one, and we agreed it was best to attempt and fail then be haunted a sense of “what if?’”

As two mature adults who agreed life without children was a perfectly valid choice, nothing prepared me for the sausage factory that is IVF.

Despite a clear understanding that success is never guaranteed, it was an experience that left us both traumatised and heartbroken.

It all begins nicely. You personally meet the doctor in beautiful offices. Everyone treats you like a VIP whispering that the doctor has made so many families happy. It is private, serene, sophisticated, boutique.

We handed over our first $10,000 payment and it is then that everything changes as you enter the sausage factory.

I joined my partner for daily blood tests and all of a sudden found ourselves in small, dated and cramped doctor’s surgery with about 50 other women. There is no privacy as you wait for your name to be called, sitting impatiently hoping not to be late for a work. You are given a 4-minute time slot and don’t you dare be late!

Once you go through the process, you have to call and see if ovulation is happening. If not, you repeat the next day with each one costing money. All care and consideration disappear.

See also  "No One Ever Explained IVF Statistics, Risks, or Likelihood of Failure"

When eventually you hit the moment of ovulation, you are given another time slot. Once again, any sense of privacy and dignity dissipates.

We went through this process three times and all three pregnancies resulted in miscarriages. They were brutal and heartbreaking. We cried and had to mourn children that were never born. It is impossible to explain the loss and no words can capture the experience.

The response from the IVF clinic was ruthless.

Firstly, we received contradictory advice. Despite the miscarriage, we were told to pursue the specific treatment to help the pregnancy take hold from one nurse. When we eventually did see another nurse, she literally laughed at us when we told her that we were continuing the treatment asking, “Why would you do that?”

When we complained about this contradictory advice, we were informed that this occurs because the various servers do not communicate – the boutique service had disappeared.

Secondly, our very successful and friendly doctor disappeared. All of a sudden, he was “very busy” and we had to seek advice from others. We could make an appointment to see him but that would cost hundreds of dollars – even if all we wanted was a brief conversation about our options.

Thirdly there was the issue of the next $10,000: we were asked to either pay up or drop out of the program.

In the end we stopped the process, and decided to get out of the sausage factory.

The response from the clinic? Silence for at least four months. The first contact was to confirm that another couple would be accessing the donor. No inquiry about our own well-being. No duty of care. No follow up.

See also  OHSS: "I felt like I was suffocating"

I understand why IVF clinics do not want to advertise their success rates: some specialise in older women and difficult cases and any surface level measure never captures the complexity of medical cases. But there also seems a distinct lack of accountability.

We saw them successfully prey on the fears and hopes of a vulnerable population with little care, responsibility or accountability. Despite being relaxed when we entered the program, we found ourselves exhausted, distressed and devastated when we exited – not because we failed, but because of the general sense of neglect we experienced.

These doctors are not miracle workers – IVF is a complex medical process. Some respect, care and dignity may not change the result but would make the mourning process for the children never born a little easier.

Email us with your #UnmaskingIVF story at info (@) reprotechtruths [dot] org